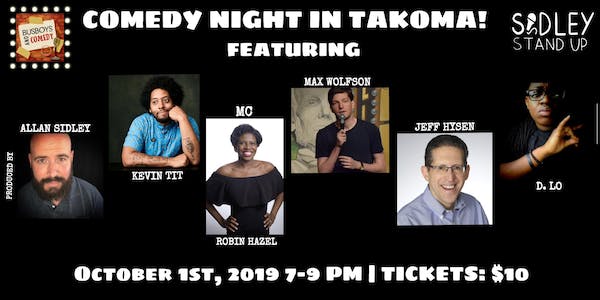 Why so serious?! If you are like us, you have found it hard to find things to laugh about. Working to change the world is grueling and daunting work, but the pursuit of happiness is what we are fighting for! So we are making time to LAUGH!

Come out on October 1st, 2019 and get your ribs tickled, massage your funny bone, slap a knee or two. Because LAUGHTER is an act of resistance!

Produced by Allan Sidley:
A comedian, improviser and lyricist, Allan is a jack off all trades. Allan‘s humor is dry, and a little wet from perspiration, usually. He toured throughout Eastern Europe in the summer of 2018 (not for comedy, just a fun fact). He did however recently headline the Church of Satire comedy club. As a producer he runs comedy shows at Busboys & Poets, Tysons Comedy Cellar, and Crystal City Sports Pub under his production company Sidley Standup. Follow him @SidleyStandup to stay up to date with shows and content.
Featured Comedians:
Robin Hazel – MC:
Robin is a Baltimore-based comic, originally from New York, by way of Pennsylvania. Her comedy has been described as”energetic,’ ‘honest,’ and ‘uninhibited.’ She has been known to perform while breastfeeding, or with a baby on her shoulders. Ask her about it. She performs all over the DMV and PA. Facebook: Robin Hazel Instagram: @HasBabyTellsJokes Twitter: Robin_HBTJ

Kevin Tit is the physical embodiment of what happens after a decade’s worth of punk bands and pizza; coupled with the inability to function as a well adjusted member of society. His life as a Stand Up Comedian began in Honolulu, Hawaii back in 2012 and has led him to performing in Festivals, clubs, music venues, bars and living rooms across the country. He now resides in DC, where he produces and hosts a series of comedy shows called PUNKHOUSE COMEDY every 4th friday at Songbyrd Record Cafe in Adams Morgan. The Washington Post once referred to Kevin as “Surprisingly funny”. He also released his debut comedy album “Life…the best joke in town” in December, 2018.

Max Wolfson is a comedian and also regular person who migrated to DC from the wild mountains of Radford, Virginia who began performing to further his goal of spending less time with his family. Blending a quick wit with outside-the-box ideas that are either very smart or very dumb, Max has smarmed and charmed audiences at the DC Improv, The Creek and the Cave, the State Theater, and on BYT’s Bentzen Ball comedy festival, and is a member of the Midnight Gardener’s League.

A husband, father and attorney who decided midway through life to stand up and share his observations, Jeff has become a favorite in the Washington, DC area and has performed in New York at The Comic Strip and the Gotham Comedy Club. He has made several television appearances, including a starring role on RLTV’s “Second Act” and was seen in a print ad for GEICO.”

D. Lo:
Dana Lollar, aka Comedian D. Lo, hails from Baltimore MD. Always a jokester, DLo stumbled into the comedy world, in Nov 2015, after a leg injury had her out of work. After countless open mics, she began to rise in the Baltimore comedy scene as a force to be reckoned with. Known for her quick wit and comebacks, she is definitely a spitfire on the mic. In her short comedy career she has won more than 15 competitions, been a finalist in Magoobys New Comedian of the Year Competition, headlined various shows in Baltimore, DC, Delaware, Ohio, NYC, Las Vegas, and even Jamaica. She is the unanimous winner of Comedy Wars DMV and has been a finalist in Kevin Hart’s “Hart of the City” on Comedy Central. Known as the “roast queen” of Baltimore, and an improv master, she’s sure to leave a lasting impression. Follow her on IG @ redcuplo & FB as PlainOlDLo.

Seating is first come first served. Full menu & bar will be available throughout the event.